Terras do Desembargador were a sporting a fundamental area for the Football evolution in Lisbon and Portugal. As “ benfiquistas” we cannot deny the very special affection we feel about it, because that is where we began and became... winners!

By the end of XIX century, many of the football matches were being played in Terras do Desembargador, next to the Convento das Freiras Salésias, in Belém, only after the Praça de Touros inauguration, in 1982, which was, until that day, the favourite place at the Capital for football matches.

In spite of being sporadic and having no predefined schedule (announced by “challenge” on that time Lisbon press pages) the football matches were attracting some sportsmen to Salésias, predominantly the kids. On Sunday matches, the little ones from Belém and the Casapianos from Restelo were “falling into the field of play” eagerly to watch football, and to see which team would win - if the challenging team our the challenged. At the end they would act like their “heroes”, in the streets or Casa Pia’s yard. 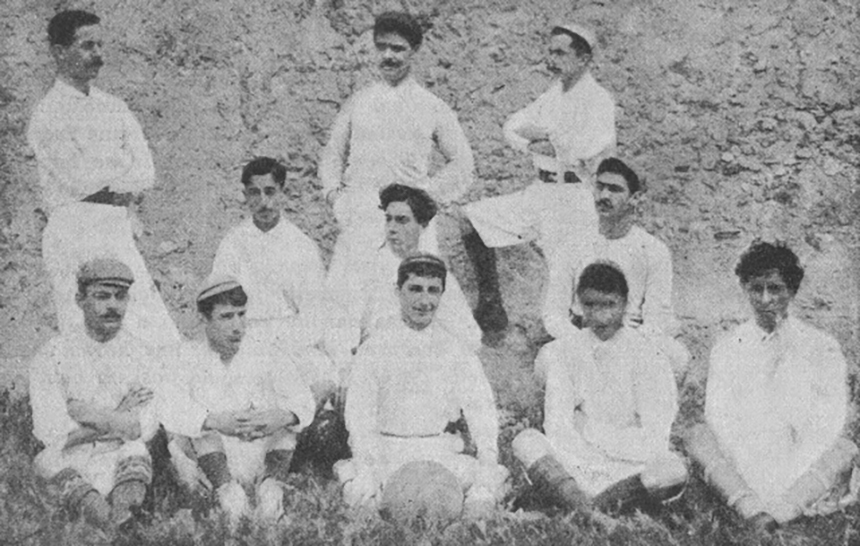 It was at those lands that, in december 1903, the Grupo de Belém, composed by the three Rosa Rodrigues brothers (known as Catataus) and their neighbors from Rua de Belém, strengthened with “ bons de bola” (talented) ex-casapianos, won for 1-0, in the rematch, against the Internacional (CIF), considered by that time the best portuguese football group (although there were some English players).

During the after victory lunch, it was suggested to found a club... with Portuguese men only! The winning, which caused a tremendous noise in Belém, led to training intensification, closer relations between the boys from Belém and the ex-casapianos and, a few months later, to our club’s foundation (28-02-1904). After the foundation, in the area of Belém, the Terras do Desembargador were one of places where the first training sessions were completed and where our club’s first match was played (01-01-1905), with a victory against Grupo Campo de Ourique, 1-0.

We were still playing in Salésias, but, with the club’s growth, in terms of members and popularity, the necessity of having an own Football field. One of the 1st Board’s first measures, elected on 22-11-1906 and headed by Dr. Janúario Barreto, came out during the second meeting, on 07-02-1907, where it was decided to acquire an athletic and private field for the club.

In a short time, the Benfica’s players were seen as the best in Portugal and the only ones with the necessary quality to face the invincible masters of Cabo Submarino, the Carcavellos Club. However, there were no training and playing conditions. The Salésias facilities were very rudimentary. Since it was a public land, it was being used for many other things, just like the soldiers and the cavalry of the Belém’s military regiments practicing, which leading the soil to poor conditions.

In addiction, the spectators were disturbing the players a lot, mostly the “soldadesca” (soldiers) who were used to watch the matches and the training sessions, as the field was the fence of a military barrack. This scene was very unpleasant , mostly to some players who were also military forces and with higher military rank... With their football skills development, as well as the professional affirmation, the players were not satisfied with carrying the equipment on their back and with open field dressing rooms, with no comfort - as they did not have age and social position for “rapaziadas” (boyishness).

In a short time, the Benfica’s players were seen as the best in Portugal and the only ones with the necessary quality to face the invincible masters of Cabo Submarino, the Carcavellos Club.

With the kids watching the match, whenever the ball crossed the “four lines”, it was a trouble to bring it back to the field, because they were used to catch the ball and play with it. There was also the the danger of some spectators getting into the field and causing an accident between them and the players. António Rosa Rodrigues got his arm broken once and, consequently, the boy who crossed the field of play got his leg broken in the crash. The incident led to police intervention, while our player went to the police station, in Belém, in order to explain the situation, as the field were public and it should be used with “urbanity”, with no troubles. By occurring accidents they should assume their responsibilities.

With the difficulty of getting an area to play football in Lisbon, our club, during season 1906/07 - our third season ever - has played, just like the rest of the clubs, in unrelated fields. Among those fields, there was Quinta Nova, at Carcavelos, which was a part of Cabo Submarino’s facilities, where the Carcavellos Cricket and Football Club was used to play - utilized for football since the 90’s of XIX century) and the Cruz Quebrada field, belonging to the Lisbon Cricket Club’s Englishmen, who were also playing football there.

The club was still seeking for fields in Belém. Nevertheless, as there were no available ones or just because rentals were very expensive, it was never possible to get the desired own field, not even outside Belém. The solution would be discovered in Benfica, where there was a club - the Grupo Sport Lisboa -, which had a nice football field, at Quinta da Feiteira, although they did not have good football players.

Nowadays, these fields are integrated, because of the enlargement of the facilities, at the “parada” of the Quartel das Oficinas Gerais de Material de Engenharia, of the Army, in the north of Rua do Embaixador, between Travessa das Zebras and Rua Alexandre de Sá Pinto.