Match from the 4th round of the Portuguese Cup.

90'+6' Final whistle. Benfica win 4-1 against Paços de Ferreira, securing their ticket to the last 16 of the Portuguese Cup

90'+3' 4-1. GOAL! BENFICA! EVERTON! One more wonderful attack from the eagles, with Seferovic in the assist and Everton with the finish.

76' Yellow card shown to Ibrahim for foul on Seferovic.

74' Substitution at Benfica: Weigl and Darwin come off, Gonçalo Ramos and Seferovic come on.

70' Rui Pires sees the yellow card after a foul on Rafa.

65' Goal opportunity for Benfica! Pizzi pokes into the area, Darwin hits the bar with a header.

61' Goal opportunity for Benfica! Everton, on the box, shoots against a defender.

60' Substitution at Benfica: André Almeida and Gedson come off, Pizzi and Taarabt come on.

52' 0-1. Goal from Paços de Ferreira. Nuno Santos scores. Cross from Lucas Silva on the left and the attacking midfielder finishes with his left foot in the box.

51' Substitution at Benfica: Valentino comes on to replace Nemanja.

46' The second half is underway!

42' Goal opportunity for Benfica! Excellent attacking play from the Reds, with Rafa and Everton in the combination, the final shot belonging to Everton. Vekic saves for a corner!

28'Goal opportunity for Benfica! A header from André Almeida in the box but Vekic makes a good save to avoid the opening goal.

19' Goal opportunity for Benfica! Long pass from  André Almeida towards Rafa, who hits the post with a right-footed shot.

17' Goal opportunity for Benfica! Rafa and Grimaldo build up the attack, Darwin makes a right-footed strike but Vekic denies him and makes the save. 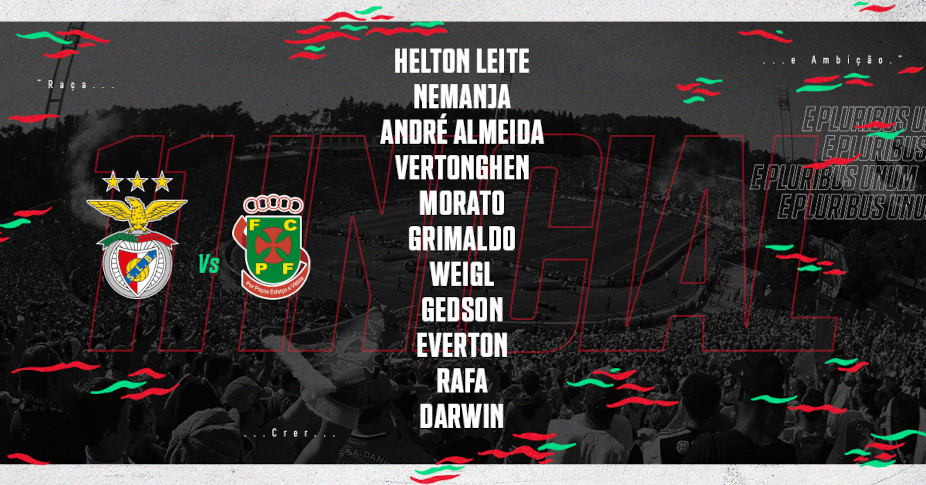