Weigl is already a Benfica player!

The process is finalized, according to the information provided to the Portuguese Securities Market Commission (CMVM).

Julian Weigl already is a player from Sport Lisboa e Benfica! The German midfielder, purchased for 20 million euros, penned a contract until 2024 and has a release clause of 100 million euros.

"Benfica is, in fact, a big club, with a huge history. I had good talks with Rui Costa, with the President [Luís Filipe Vieira] and with Tiago Pinto, and I felt that they really wanted me to come to Benfica. I had a special feeling during those talks and it was clear to me that I wanted this move. I also know the atmosphere experienced at the Stadium [Estádio da Luz], I played here with Borussia Dortmund, the supporters are great and I'm looking forward to playing for them", he claimed. In the statements given to BTV, Weigl confessed to having asked Axel Witsel and the Portuguese international Raphael Guerreiro about Benfica.

"Yes, first I spoke with Witsel, and I also spoke with Raphael Guerreiro, who didn't play here, but who also likes the Club very much. I've only heard good things. It was good for me to know that other people have the same feeling as me", revealed the midfielder. He is 21 years old and signed a contract with Sport Lisboa e Benfica for five seasons (until 2027). Born in Argentina, midfielder Enzo Fernández met with President Rui Costa this Thursday, July 14, and will wear the Sacred Mantle with the clear ambition to contribute to the successes desired by the Club. 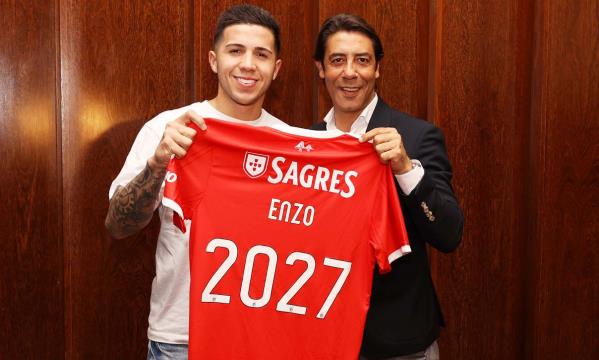 Enzo Fernández is a Benfica player!

The midfielder signed a five-season contract (until 2027). Sport Lisboa e Benfica informs that has reached an agreement with Inter Milan for the loan of the player Valentino, who signed contract until June 2022. The official presentation takes place on Wednesday, September 1. Yaremchuk is a Benfica player

Sport Lisboa e Benfica informs that it has reached an agreement with Gent for the transfer of the player Roman Yaremchuk, who has signed a contract with our club valid until 2026. Yaremchuk's presentation will take place this Sunday, August 1.